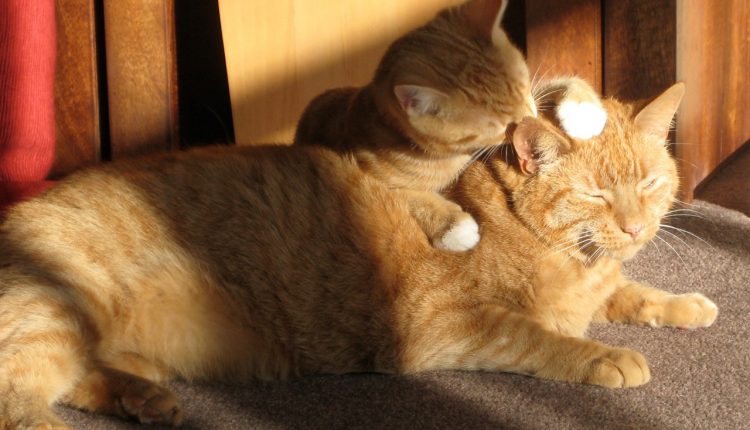 Cats can lick for hours on end. Being clean takes dedication when you have that much fur. Cats use their specially adapted tongues to maintain proper hygiene, whether it’s removing dirt accumulated throughout the day or detangling knots from their fur. However, this cleaning ritual does not always stop with their bodies. Their licking spreads to their furry friends, and we’re not sure why.

If you have multiple cats at home, you may notice that they start grooming each other even when there is no obvious reason for it. The cats have their tongues and may appear spotless, particularly if they are indoor cats with less opportunity for the mess. Continue reading to learn why do cats lick each other and whether it is more than just vanity.

Cats lick themselves for a variety of reasons.

Before we get into why do cats lick each other, it’s important to understand why they lick themselves. The majority of licking is done by a cat as part of their grooming ritual. This entails coursing through their fur to get at every accessible part. It doesn’t just refer to licking. Cats are frequently seen biting at difficult-to-untangle knots or getting their teeth in between their toes.

Cleaning their fur is usually done at various times of the day. Cats, for example, may groom themselves after eating to remove food remnants as well as the odour. This is a natural behaviour that they inherited from their parents.

A cat’s lack of sweat glands is another reason for licking. These, like many mammals, are only found on the pads of their paws. As a result, when it’s extremely hot, they can’t rely on this small area of their body to keep them cool. This is where the fnf cartoon cat comes into play. When they lick themselves, they leave a trail of saliva behind them.

When the salvia evaporates in the heat, it provides the cat with a refreshing sense of coolness.

Furthermore, licking is a form of relaxation. If your cat is anxious, stressed, or otherwise upset, they will lick themselves for comfort. The actions relax them and most likely bring back memories of being mothered as a kitten.

This licking is typically done on the body’s sides or by licking their paws and then rubbing over their head and snout. We must, however, exercise caution. Excessive licking can indicate that the stress is too much and that there is a physical or mental issue at hand.

Cats lick each other to bond with one another.

Licking isn’t just for fun. It can also be a physical manifestation of the trust that some cats have in each other when they are together. This is known as social grooming, and there are several reasons for it. One of them is to simply strengthen the bond between two or more cats. It’s also important to remember that even hairless cats will lick themselves and each other because keeping clean is important regardless of whether they have fur or not.

If your cats do this, it means they adore and trust one another. They are happy to express how relaxed they feel when they are together. As with any trust exercise, it exposes them to vulnerability, which may not come easily. In these cases, the licks are usually concentrated in the facial area and the ears, which are two of a cat’s favourite places to show affection.

Cats from the same litter licking each other.

Cats lick each other to strengthen their bonds within the same family. These can be kittens from the same litter, but it does not always have to be blood relatives. Cats that grow up together form a familial bond and encourage it by licking each other’s coat.

The licks aren’t just a show of affection. They also leave a familiar odour on each other, identifying them as members of the family and distinguishing them from potentially dangerous outsiders.

What is the purpose of cats licking their young?

Adult cats usually spend a significant amount of time licking their kittens. They do this to identify them as members of their family and to warn others that these kittens are in their territory. This means they will best protect them from anything that tries to harm them.

If the mother does not lick their cat frequently enough, it can cause a change in smell, which can lead to rejection. Mothers will reject their kittens if they appear unfamiliar or are ill. Licking strengthens a vital bond, without which serious problems can arise.

Cats licking each other to protect themselves

Bringing a new cat into your home is a difficult decision. There’s always the worry about how the cat who already lives there will react. In these cases, not all cats will react the same way to the arrival of a new family member.

Some cats can be difficult to socialise with when they meet a new cat. Others, on the other hand, will be more relaxed and quickly warm to a new friend. This is why it is critical to understand how to introduce a new cat into a family.

Best Way to Pull Out Ticks